Punk rockers are credited with being the first to use safety pins to embellish clothing (and more). It’s an idea that’s been repeated and admired ever since. I was very inspired by the 1987 safety pin covered mini dress and shawl designed by Stephen Sprouse in the 2012 IMA exhibition An American Legacy: Norell, Blass, Halston, and Sprouse. Covered in small brass safety pins, the pins are arranged in tightly spaced horizontal rows that create a refined, complex surface, reminiscent of rows of beading or fringe on flapper era dresses. 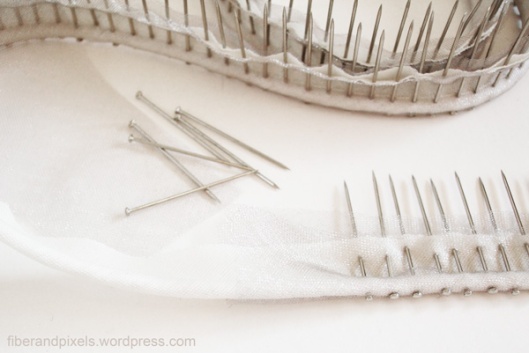 I wanted to create the same evenly spaced effect, but with rows of straight pins. The straight pins represent both my love of sewing and the prickly, self protective way I can act and feel from the pain of a headache. I began inserting straight pins into piping covered with bias cut ivory fabric, then a layer of bias cut sheer gray fabric. The ivory creates a contrast to the silver of the pins. The soft sparkle of the sheer gray nylon creates a transition between them.

When making samples, I found that I liked the added dimensionality when the edges of the bias strips rippled out from the pins. To emphasize this effect, I’m varying which edges are above and below the pins as I insert them.

When first making samples, I tried wrapping the trim in a coil to create a dense grouping of points. After making 6 yards of straight pin trim, I again experimented with how it might be used to embellish a hat. I’m thinking of a coil placed as a protective/defensive ear covering. 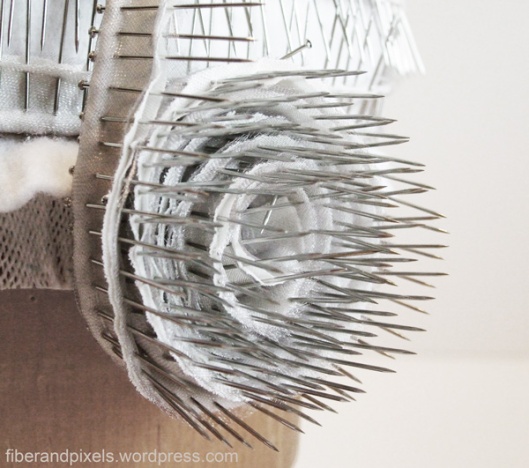 The unfinished hat is ivory colored wool, steamed to shape over a buckram base. I plan to cover the wool with a layer of the same sheer gray fabric.