I found this hat at a local thrift shop. It’s made of iridescent taffeta which appears to shift from more red purple (magenta) to more blue purple (blue violet). The color shift is due to different color threads used for the warp than the weft, blue and red. They optically mix to create purple.

Iridescent taffeta is a favorite fabric of mine to use in 3D work because the shifting color effect adds more dimensional richness and depth to the work, emphasizing and enhancing the 3D shaping more than a solid color does.

The taffeta is cut into bias strips, folded over a bias strip of crinoline to add body, and stitched in a spiral starting at the lower edge of the brim and working upwards.

The spiral construction reminds me of some straw hats. The taffeta strips are folded and pressed like double fold bias tape with the crinoline folded inside. Each round folds over both sides of the previous round, encasing it.

I like how the exposed folds face outward and downwards. I think they would catch less dust than facing upwards. If I were to use this construction technique on my home sewing machine, and stitch the whole hat as one continuous spiral, I think I would have to reverse the direction, starting at the center of the crown and working towards the lower edge of the brim. 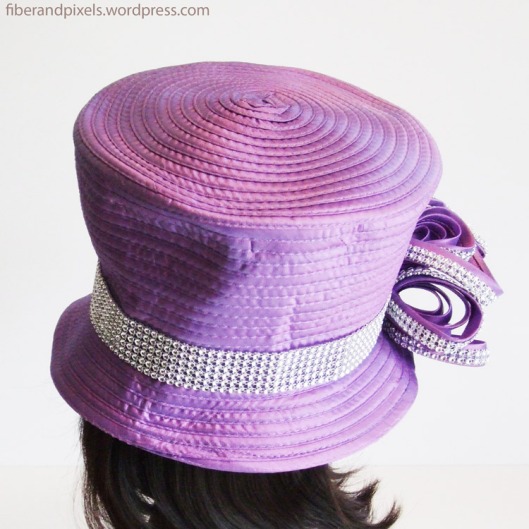