I designed this paper top hat as part of a 5 day hat design workshop at Miami University “The Art of the Hat” with British milliner Dagmara Childs. My design was inspired by the sewing cards that children play with, where they use yarn laced through pre-punched holes to decorate or assemble pieces made from card stock or wood. I remember a set from years ago that had hats and uniforms that you sewed onto figures; a variation of dressing paper dolls. Here is a link to a vintage set where you sew different clothes and accessories on Mickey & Minnie, including a top hat. 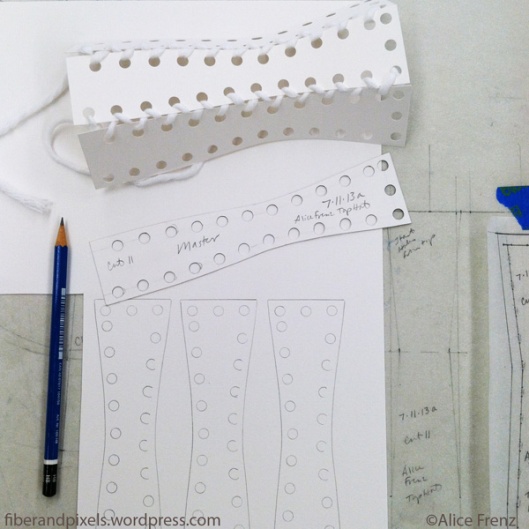 My design concept also developed from thinking about what I could do with some of the limited supplies and tools I had on hand while staying in Oxford. The hat is constructed from Bristol board and white microfiber yarn, using scissors and a paper punch. 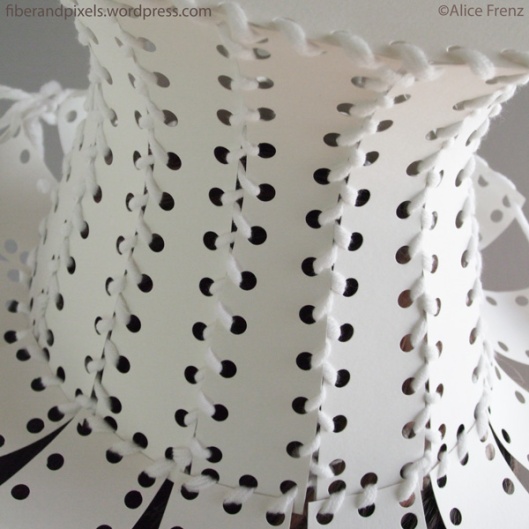 You can also see an influence of the historic clothing I’ve been studying. My classmate Kristen Wright is experienced in Renaissance fashions and helped me with ideas for planning out the lacing. Through testing and her advise, I found that I needed to stagger the holes, aligning each with the empty space on the opposite side. This makes one hole more closely spaced at the top and bottom of each vertical lacing. I should have also staggered the holes in the brim pieces where they lace to the vertical side band pieces.

As I constructed the sides of the hat, a more dramatic corset shaping developed than I had planned, and I had to add 2 more segments to make it fit my head. The next day I realized this was due to a math error I had made. I had tested sample pieces laced together to measure the space needed in between for the lacing. It was 1.5 millimeters, but I had accidentally subtracted it as 1.5 centimeters instead of millimeters.

After adding the 2 extra segments, I then used drafting dividers to evenly space 36 holes around the oval tip, or crown, of the hat. Next, I drafted a pattern for the brim segments. I decided to use a similar spacing of holes on the edges to maintain the same lace like feel, and to give me the option of lacing between segments even though my original sketch had the spaces left open. I’m still undecided about leaving them open and will probably try another version with them laced.

The brim segments were curled to varying degrees and spacing adjusted in the lacing along the outer edge of the brim to shape it. I decided to end the brim lacing with a bow at the back to relate to both the garment and corset lacing impression, and to relate to the bow commonly seen inside the back of men’s dress hats. Here’s a link to Google Books The Pittsburgh Press May 14, 1920 explaining a little history of why there’s a bow inside men’s hats. I should have planned better for curling the brim segments and placed each one following the grain of the Bristol board so it would curl more smoothly. I’m excited about trying more variations and refinements of this concept. 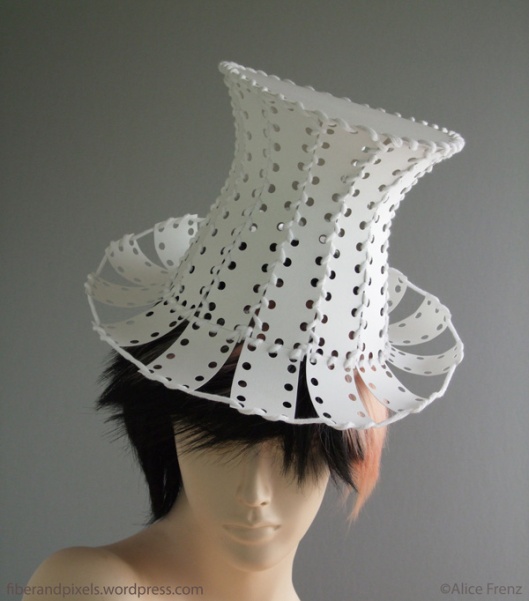 For pattern and instructions go to Make a Paper Top Hat.